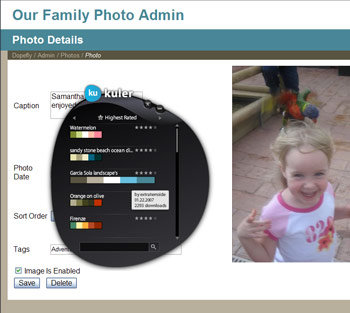 I just noticed the Apollo Kuler widget was released through the Kuler site. It umm, works as advertised. I'm a fan of Kuler, if nothing other than I don't have to experiment with color schemes to get one that works. Here's a screenshot of my family photos admin area and the color scheme (kuler scheme?) I used on it. The cool thing is switching it to a new scheme is a no-brainer. Yep, programmers work as hard as they can to be as lazy as possible.

posted under category: Design on November 30, 2004 by Nathan

Have you ever noticed your text seem to jump when you have a blue link with a red hover? Here's a sample, Notice the pixel shift:

This text should highlight red when you hover over it

The fact is, it does move, it moves 1/3 of a pixel on a traditional monitor. Monitors are made of RGB blocks, when you turn one off and turn on another, it makes your text seem to jump over just a bit.

So when you're placing some links and it looks like they might be moving, try a color closer to your original link. (discuss!)