IE6 No More applied to my web site

posted under category: Standards on August 5, 2009 by Nathan

Here's just a note to mention that I put the IE6 No More banner on my web site. It was dead simple, dropped it right into the top of my layout and it shows up on every page. If you have a web site, I recommend you do it too! 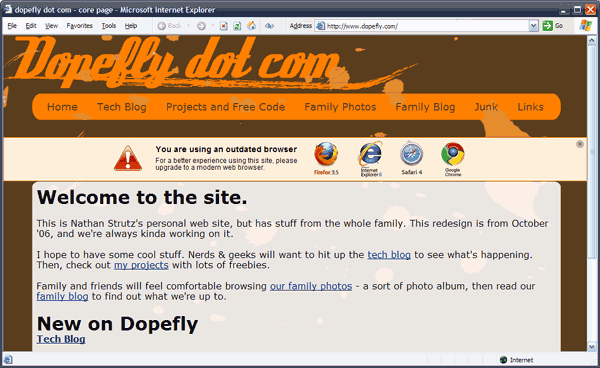 Less CSS - how CSS should have been!

posted under category: Standards on July 25, 2009 by Nathan

Has anyone else seen Less - Leaner CSS? Let me sum it up for you. It goes like this:

WHAT IS WRONG WITH THE W3C?


And you can take that one to the bank.


Seriously though, Less is an app built in Ruby that lets you write CSS in a reasonable fashion, which it will compile into unreasonable standard CSS.

And what is reasonable for CSS? Where is it that the W3C has failed us so terribly? Less' feature set says it all: variables, mixins, nested rules and operations. You'll probably have to see it to believe it, but once you see it, you'll get it. Go ahead, visit the Less CSS site, just the home page shows you everything.

My only problem with it is that it's Ruby. I don't have anything in particular against Ruby, I just don't want to install it or figure out how to use it to start coding with Less.

So where does that leave me?

1) Rewrite it in a language I like more
2) Suck it up, use Ruby
3) Recompile it with jRuby
4) Run it with HotRuby (translate into Javascript)

Until then, I guess I will just be dreaming about it.

posted under category: Standards on April 5, 2007 by Nathan

Why didn't anyone tell me it was CSS Naked day? Ok, well problem fixed, and for next year as well. I hope you like my web site sans stylesheets and nice designs. The only thing that really stands out on my whole site is the google reader toy I put in my left side area.

posted under category: Standards on October 4, 2006 by Nathan

If you saw this site in the last couple days with IE6, you saw the box model problem they always talk about. I liberally use padding in my stylesheets. Padding, of course, is the space between the border of an area and the content within that area. When you specify a width and a padding size, you are supposed to subtract the width of that padding (on each side), and your margins and borders to get the size of your area. However, IE6 doesn't really abide by this law.

It's a fairly simple fix, thankfully.

The more specific html>body rule overrides the cascading width for browsers who know how to obey rules.

Web Standards and YOU

posted under category: Standards on October 14, 2004 by Nathan

It dawned on me that designing and developing sites with web standards isn't usually a lack of desire to follow the standards, but a lack of knowing what these standards are, and how to properly implement them.

HTML is dead! XHTML has taken its place. The time to jump on the new bandwagon has come.

Why Upgrade?The simple facts are, standards-driven web sites are easier to maintain, save on bandwidth costs (and thus download faster), and are more compatable with emerging browsers (phones, etc.). Those equate directly to the bottom line.

What do I have to learn? If you write HTML, you should understand the XML basics, close all your unclosed <tag />'s, use lowercase tag and attribute names. After that, it's all about simplifying your markup and perfecting your CSS. Read some books, take a class, visit some web sites. Get involved and ask questions when you're lost.

I want to improve the quality of the internet experience by making the web a better place to surf. You can help! Start small if you want to, but do start on this path to web standards development.